Dr. Jacques Trottier, Executive Chairman of Amex, commented, “I am very pleased to have essentially replicated the widths and strong grades of the discovery hole with a vertical step down by 65 metres. This successful follow-up drill hole confirms that this mineralization could be of significant size and we are enthusiastically looking forward to the results of this follow up drilling phase. We have since drilled additional holes targeting the on-strike and vertical extensions of this mineralization. The similarity in grade of the QF Zone holes announced to date to the past-producing 10.1 million tonne Normétal Mine is especially encouraging. On the backs of the successes to date on this zone, Amex has allocated an additional 5,000 metres of drilling to further test this copper-rich sulfide zone.”

Table 1: Assay results from the QF Zone at Perron 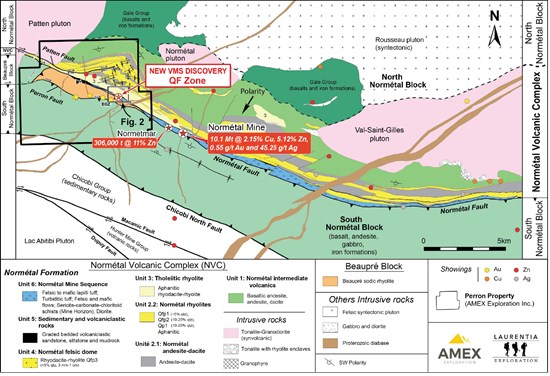 Figure 1: Geological map of the Normétal Volcanic Complex, with the location of the Perron Property and the new VMS discovery (named the QF Zone). Modified from Lafrance et al., 2000. 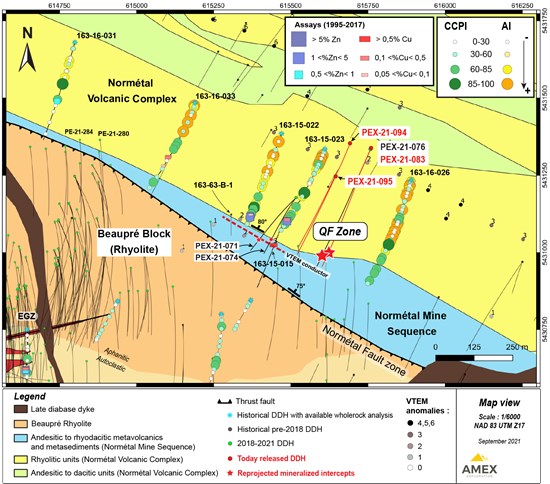 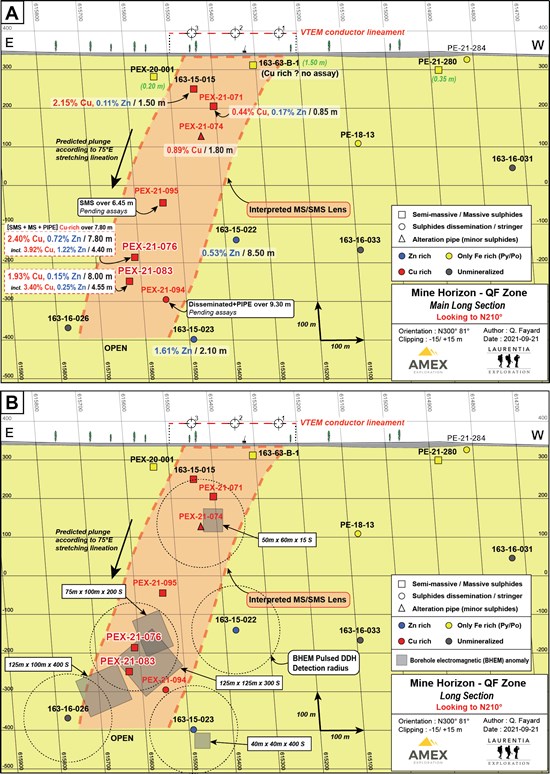 Figure 3A and 3B: Long section of the QF Zone. A) All drill holes intersections with an emphasis on grades and mineralization typology. B) All drillholes intersections with an emphasis on borehole electromagnetic (BHEM) anomalies. Abbreviations: MS – Massive sulphides; SMS – Semi-massive sulphides; Po – Pyrrhotite; Py – Pyrite; VTEM – versatile Time Domain Electromagnetic. 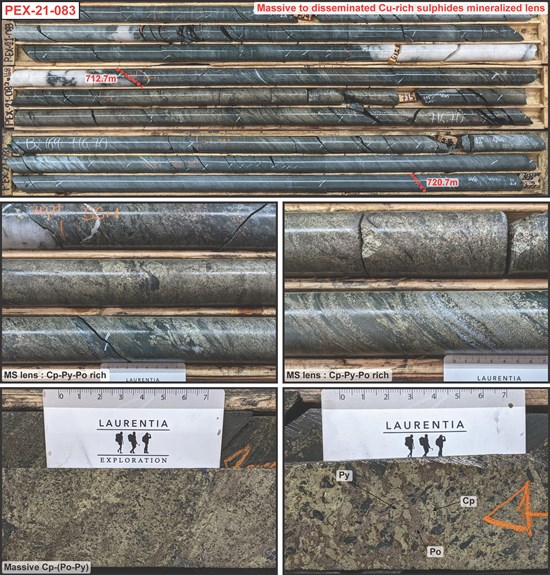 Maxime Bouchard P.Geo. M.Sc.A., (OGQ 1752) and Jérôme Augustin P.Geo. Ph.D., (OGQ 2134), Independent Qualified Persons as defined by Canadian NI 43-101 standards, have reviewed and approved the geological information reported in this news release. The drilling campaign and the quality control program have been planned and supervised by Maxime Bouchard and Jérôme Augustin. Core logging and sampling were completed by Laurentia Exploration. The quality assurance and quality control protocol include insertion of one blank, one standard and one duplicate every 10 samples, in addition to the regular insertion of blank, duplicate, and standard samples accredited by ALS Canada Ltd. during the analytical process. Additionally, sample weight is taken prior shipment to validate sample identity. Gold values are estimated by fire assay with finish by atomic absorption. Zinc, Copper and Silver values are estimated by four acid digestion multi elements Inductively Coupled Plasma – Atomic Emission Spectroscopy (ICP-AES), ME-ICP61. Zinc values over 1%, copper values over 1% and silver values over 100 g/t are estimated by four acid digestion ICP-AES, OG62. The Qualified Person has not completed sufficient work to verify the historic information on the Property, particularly in regards to historical drill results. However, the Qualified Person believes that drilling and analytical results were completed to industry standard practices. The information provides an indication of the exploration potential of the Property but may not be representative of expected results.

Amex Exploration Inc. is a junior mining exploration company, the primary objective of which is to acquire, explore, and develop viable gold projects in the mining-friendly jurisdiction of Quebec. Amex is focused on its 100% owned Perron gold project located 110 kilometres north of Rouyn Noranda, Quebec, consisting of 117 contiguous claims covering 4,518 hectares. A number of significant gold discoveries have been made at Perron, including the Eastern Gold Zone, the Gratien Gold Zone, the Grey Cat Zone, and the Central Polymetallic Zone. High-grade gold has been identified in each of the zones. A significant portion of the project remains underexplored. In addition to the Perron project, the company holds a portfolio of three other properties focused on gold and base metals in the Abitibi region of Quebec and elsewhere in the province.