Amex Expands HGZ by over 275 metres to 1,100 metres Vertically and Reports Multiple High Grade Intercepts Including 14.07 g/t Au over 9.75 metres

Amex Exploration Inc. (“Amex or the Company”) (TSX-V:AMX) (FRA:MX0) (OTCQX:AMXEF) is pleased to report significant vertical depth expansion of the High Grade Zone (HGZ) of the Eastern Gold Zone, of the Perron property in northwestern Quebec, Canada. (Figure 1) The Company is reporting substantial high-grade gold mineralization in multiple drill hole intersections from the HGZ as detailed below and in Table 1.

Highlight results from the HGZ include: (Figure 2)

Interpretation of the HGZ now suggests:

Gold mineralization has been traced over 350 metres laterally, from near surface to over 1.1 km vertically and averages approximately 7 metres of width (core length) with a maximum identified strike length of 150 metres of the zone at depth.

Jacques Trottier, PhD Executive Chairman of Amex said, “Since discovery, my team and I have been convinced that the HGZ is a robust mineralized system that extends to significant depths. With these drill holes we have confirmed that the system carries high grade gold to depth greater than 1 kilometre vertically and is continually strengthening as we go deeper. Of particular interest to me, is that the highest grade core of the system, (i.e. with a metal factor greater than 100 g/t Au by meter as shown in pink on Figure 2) is more than double the vertical distance at depth in comparison to the near-surface portion of the HGZ. In addition, we have completed step out drilling at depth along strike and have identified significant visible gold mineralization, which will expand the strike length of the system. We look forward to the receipt of these assays and to continuing to grow this continuous high gold system.” 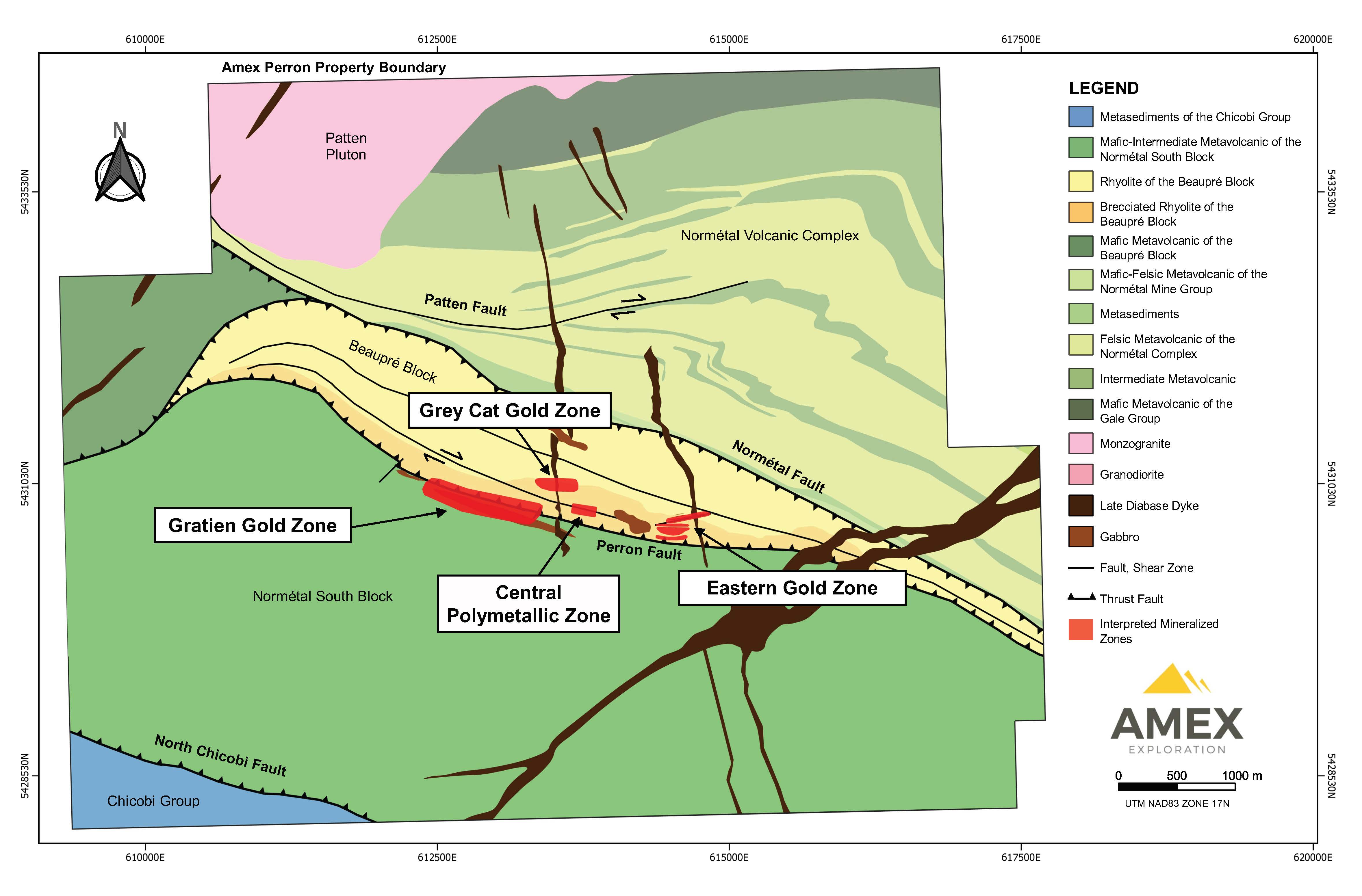 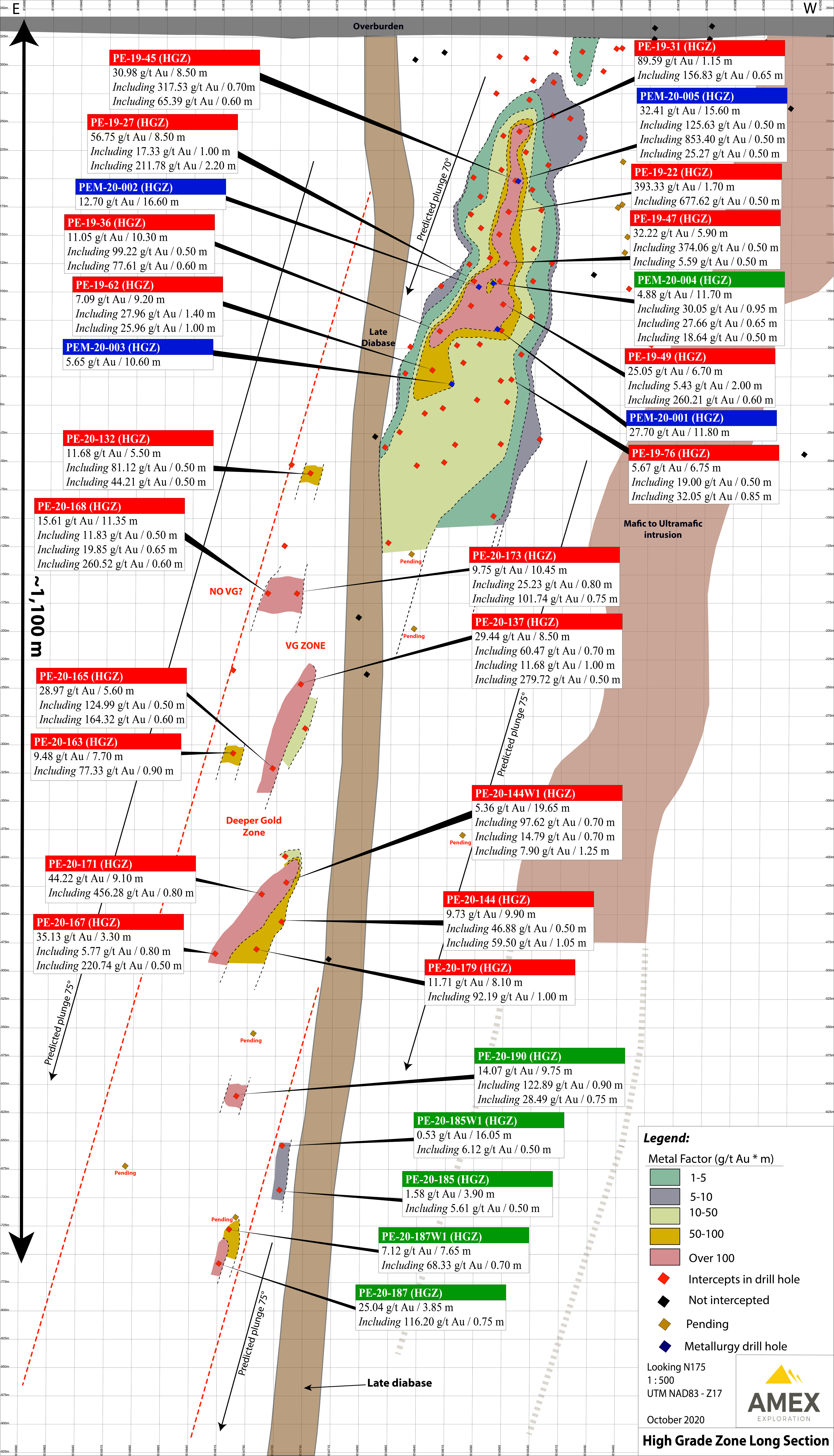 *Note that the Metal Factor is the Gold average grade multiply by core length of an intersect.

Table 1: Assay Results from the HGZ at EGZ

* Note that drill results are presented uncapped and lengths represent core lengths. True width is estimated to be ~75% in HGZ for all holes except those beginning with “PEM” which are estimated to be ~50%.

Maxime Bouchard P.Geo. M.Sc.A., (OGQ 1752) and Jérôme Augustin P.Geo. Ph.D., (OGQ 2134), Independent Qualified Persons as defined by Canadian NI 43-101 standards, have reviewed and approved the geological information reported in this news release. The drilling campaign and the quality control program have been planned and supervised by Maxime Bouchard and Jérôme Augustin. Core logging and sampling were completed by Laurentia Exploration. The quality assurance and quality control protocol include insertion of blank or standard every 10 samples on average, in addition to the regular insertion of blank, duplicate, and standard samples accredited by Laboratoire Expert during the analytical process. Gold values are estimated by fire assay with finish by atomic absorption and values over 3 ppm Au are reanalyzed by fire assay with finish by gravimetry by Laboratoire Expert Inc, Rouyn-Noranda. Samples containing visible gold mineralization are analyzed by metallic sieve. For additional quality assurance and quality control, all samples were crushed to 90% less than 2 mm prior to pulverization, in order to homogenize samples which may contain coarse gold. Core logging and sampling were completed by Laurentia Exploration.

Amex Exploration Inc. is a junior mining exploration company, the primary objective of which is to acquire, explore, and develop viable gold projects in the mining-friendly jurisdiction of Quebec. Amex is focused on its 100% owned Perron gold project located 110 kilometres north of Rouyn Noranda, Quebec, consisting of 117 contiguous claims covering 4,560 hectares. A number of significant gold discoveries have been made at Perron, including the Eastern Gold Zone, the Gratien Gold Zone, the Grey Cat Zone, and the Central Polymetallic Zone. High-grade gold has been identified in each of the zones. A significant portion of the project remains underexplored. In addition to the Perron project, the company holds a portfolio of three other properties focused on gold and base metals in the Abitibi region of Quebec and else where in the province.