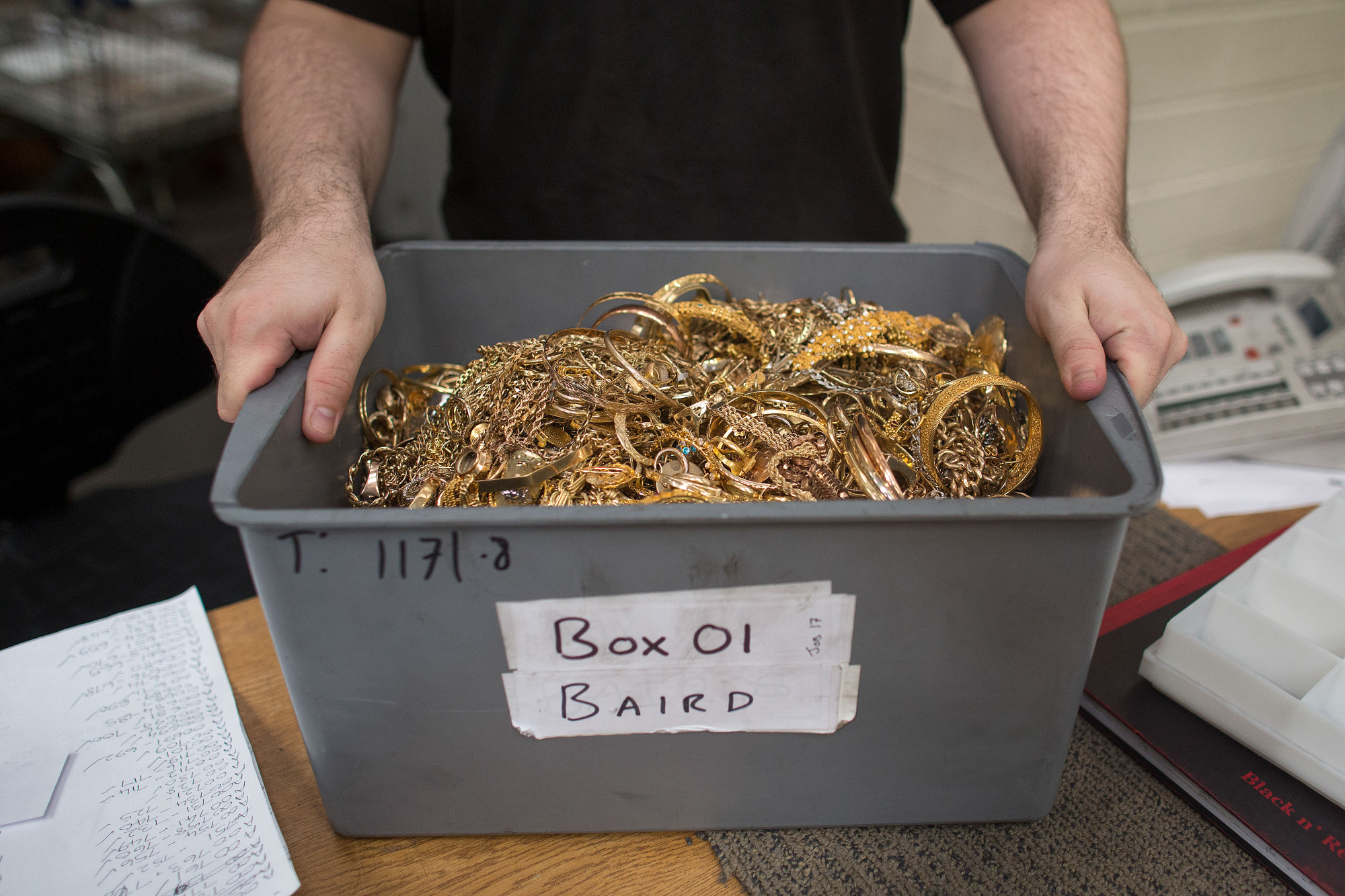 The surprising rebound in gold prices this year has given new life to unwanted jewelry, coins and trinkets — in the melting pot.

More than a third of the world’s bullion supply usually comes from recycled metal, but purchases at pawn shops and cash-for-gold companies had slowed during a three-year slump in the market. That’s all changed. With prices headed for their biggest annual gain since 2010, more people are unloading old treasures, recyclers are expanding capacity and some jewelers are seeing their businesses transformed.

“We’re buying more gold than we’re selling now,” said Mark Hicks, the owner of Farringdons, a jeweler in the Hatton Gardens gold district of London. “When there is an increase in the gold price, and when that gets reported, people go digging in their cupboards and drawers and bring out all the little items they don’t want, and they bring it to us.”

Almost all the gold ever mined is still around in one form or another, so recycling everything from jewelry to electronic circuit boards has been a key source of supply. Prices remain the biggest influence on the scrap industry. When bullion tumbled as much as 45 percent from a record in 2011, the amount melted at refineries fell, reaching an eight-year low in 2015, World Gold Council data show.

But in the first six months of the year, recycling is up about 10 percent from the same period in 2015, heading for the first annual increase since 2009, Gold Council data show. Prices have jumped 26 percent in 2016, touching a two-year high of $1,375.34 an ounce in July, and had their biggest first-half rally since 1974. Bullion traded at $1,340 on Tuesday.

That was enough incentive for Soon Beng Gee, a 43-year-old small business owner in Singapore. He gathered up old necklaces and bracelets that had been in his family for two decades but that no one was wearing anymore. He sold them to a local dealer.

The ornaments were “quite bulky, and the designs were old-fashioned,” Soon said. “If the price is good, might as well sell.”

Baird & Co., which buys much of the U.K.’s scrap gold from collectors and pawn shops, is planning a 50 percent expansion at its 20-ton-a-year refining plant, which is near the London 2012 Olympic village.

“We’ve un-mothballed parts of our plant,” Tony Dobra, an executive director at Baird, said as he stood among furnaces, vials of chemicals and shopping trolleys filled with gold at the plant. “When prices were lower, we struggled to get enough material to meet demand. Now we’re seeing double the volume we did a year ago.”

Gold prices have rebounded this year as the Federal Reserve refrained from increasing U.S. borrowing costs, and Japan and Europe embraced negative rates to spur growth. That’s sent more investors to buy bullion as an alternative asset, while geopolitical turmoil and financial market volatility boosted the appeal of the metal as a store of value.

A stronger dollar, used in most bullion transactions, has made selling gold more attractive in countries where currencies have weakened, including the U.K., where voters in June elected to quit the European Union. That referendum pushed locally-priced metal above 1,000 pounds an ounce to the highest level in three years. In South Africa, one of the world’s top producers, prices touched an all-time high in the local currency in June.

Degussa Precious Metals Asia Pte Ltd., a major bar and coin dealer in Singapore, saw a 60 percent increase in scrap purchases from February to July. For European coin dealer CoinInvest.com, buybacks doubled as a share of sales since the so-called Brexit vote on June 23.

There are some places where people are holding onto their old jewelry and trinkets.

In India, the world’s second-largest gold buyer, supply was reported flat as low demand meant there was little old jewelry being exchanged for new. In Turkey, the largest gold recycler last year, sales have slowed after reaching a record in 2015.

“Our business has been very, very slow,” V.K. Agarawal, a director at Shirpur Gold Refinery Ltd., said by phone from Mumbai. “We have not seen any scrap coming in the market.””

However, in Dubai, refiners say scrap material from India has been a lifeline. Their flows were hit last year when India offered tax-breaks for purifying dore, semi-refined material. The tax breaks don’t apply to scrap, meaning it’s profitable to export to the city-state, where premiums are higher.

“The sustained rally in gold has helped scrap volumes immensely,” said Brad Yates, the head of trading for Dallas-based refiner Elemetal, where volumes are up 40 percent compared with a year ago. “The physical game is all about supply right now.”