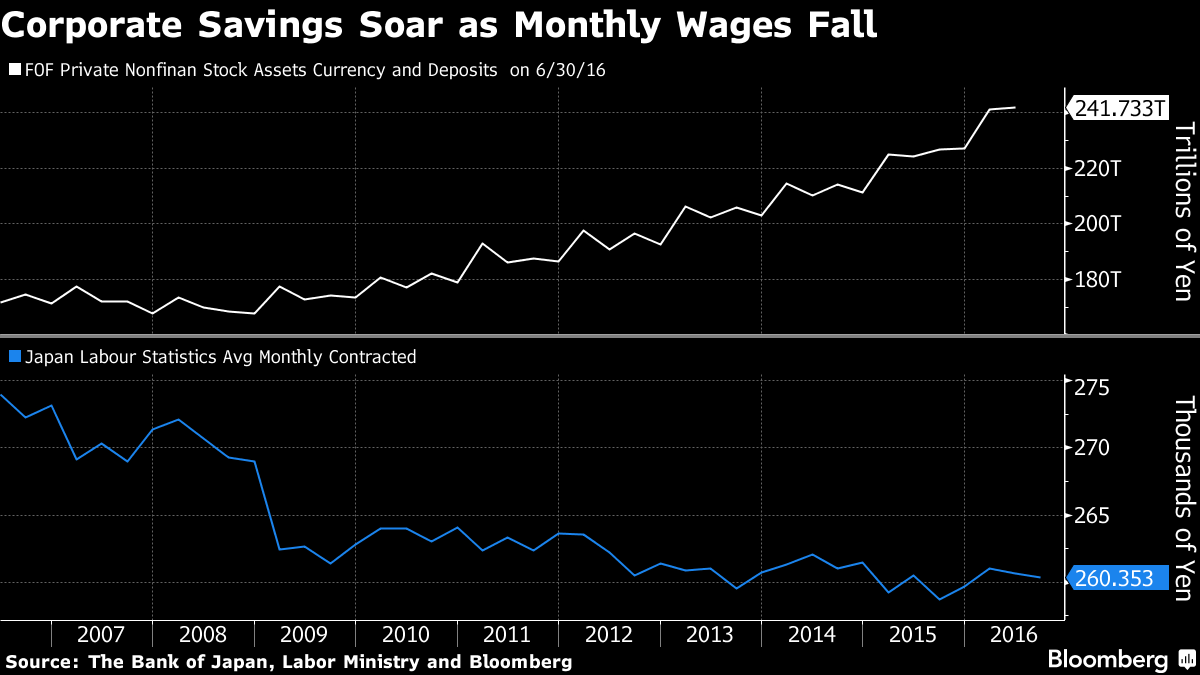 The rich and powerful versus the weak and underpaid.

That’s how the International Monetary Fund sees Japan’s relationship between employers and workers. Unless more is done to address the problems in the country’s labor market, Japan as a whole will be the loser, according to the IMF’s mission chief for the country, Luc Everaert.

“We are concerned the reduction in the wage bargaining power of labor has gone too far,” Everaert said in an interview in Tokyo. “We have introduced too much flexibility in the Japanese labor market in favor of employers.”

Everaert, 55, was speaking after data from the Bank of Japan on Monday showed corporate cash and deposits rose to a record 242 trillion yen ($2.4 trillion) last quarter, underscoring employers’ reluctance to heed calls for stronger wage growth and capital investment. Stagnation in salaries is undermining consumer spending in Japan and efforts to spur inflation and sustained economic expansion.

It is not the first time Everaert has waded into the wages debate since becoming the IMF’s mission chief for Japan in September last year. He has advocated using moral suasion to name and shame highly profitable companies that won’t raise salaries much, and suggested using tax incentives to promote pay hikes.

Japan’s company-based labor unions have focused on trying to maintain lifetime employment for full-time workers at the expense of pushing for more pay, and have provided little or no representation for the rising number of people on part-time, contract and temporary positions. This second category of employees, collectively known as non-regular workers, now account for about 40 percent of the labor market.

Everaert views Japan as having gone from one extreme — a rigid lifetime model that handicaps companies’ ability to adapt to economic changes — to another that provides so little job security and benefits to non-regular workers, which ultimately harms the economy because it crimps consumer spending.

“The lifetime model has served the Japanese economy well from a historical perspective in the 60s and 70s,” he said. “I think the system has outlived its usefulness.”

Japan needs employment contracts somewhere in between these extremes, which would allow companies to restructure their workforces, while providing reasonable severance conditions and benefits to workers, including portable pension plans, he said. Everaert noted that boosting the mobility of full-time, regular employees would be good for wage dynamics and the efficient allocation of labor.

He does give the government credit for efforts to raise the minimum wage and pay for nursing care workers.

Everaert said the government should do away with a spousal tax deduction that reduces the incentive of many married women to work full-time.

Without labor-market reforms, the central bank’s monetary easing and the fiscal stimulus from Prime Minister Shinzo Abe’s government will fall short of changing the course of the Japanese economy, Everaert said.

“It’s crucial if Abenomics want to achieve their targets within the time-frame that they set for themselves,” he said. Without boosting wage growth and getting the right amount of flexibility into the labor market, Japan won’t see growth rates much higher than those of today, he said.