Global growth will only modestly accelerate next year as the world grapples with the twin prospects of rising U.S. interest rates and slowing expansion in China, International Monetary Fund Managing DirectorChristine Lagarde said.

The likelihood that the Federal Reserve will tighten monetary policy, coupled with China’s slowdown, “are contributing to uncertainty and higher market volatility” in the global economy, Lagarde said in a speech in Washington on Wednesday. The IMF will host its semi-annual meetings next week in Peru.

The fund’s World Economic Outlook, to be released Oct. 6, will confirm that the global growth rate is expected to be weaker this year than in 2014, she said. In July, the Washington-based IMF projected world growth of 3.3 percent this year, down from 3.4 percent in 2014, and accelerating to 3.8 percent next year.

The IMF now expects only a “modest acceleration” in 2016, Lagarde said on Wednesday. She didn’t provide a specific forecast.

“We see global growth that is disappointing and uneven,” Lagarde said. “The ‘new mediocre’ of which I warned exactly a year ago — the risk of low growth for a long time — looms closer.”

Fed ChairJanet Yellen said Sept. 24 that the central bank, which has held rates near zero since late 2008, was likely to begin tightening policy later this year if the economy stays on track. Lagarde has previously urged the Fed to delay liftoff until 2016.

While emerging markets are generally better prepared for higher U.S. rates than in the past, rising borrowing costs and a stronger dollar “could reveal currency mismatches, leading to corporate defaults — and a vicious cycle between corporates, banks and sovereigns,” Lagarde said.

More broadly, most advanced economies should continue to keep monetary policy loose, while incorporating “spillover” risks into their decision making. Emerging economies need to improve their monitoring of the foreign exchange exposures of majorcompanies, while countries with room to raise public spending should try to boost growth by increasing investment, especially in infrastructure, she said.

The growth potential of the world economy is being held back by low productivity, aging populations, and legacies of the financial crisis, such as high debt, she said.

The fund’s latest World Economic Outlook will show evidence of a “modest pickup” in advanced economies, with the euro-area recovery strengthening andJapan returning to growth, she said. However, expansion in emerging economies will likely decline for the fifth straight year.

In addition, reforms in China to lift incomes will lead to “slower, safer and more sustainable” growth, she said, adding thatChinese policymakers “are facing a delicate balancing act: they need to implement these difficult reforms while preserving demand and financial stability.”

“Recent global economic and financial developments may restrain economic activity somewhat and are likely to put further downward pressure on inflation in the near term,” the Federal Open Market Committee said in a statement Thursday in Washington.

In holding their benchmark federal funds rate at zero to 0.25 percent, policy makers showed they are still not convinced inflation will move gradually back to their 2 percent target, despite continued gains in the labor market. Unemployment in August fell to 5.1 percent, its lowest level since April 2008.

“On balance, labor market indicators show that underutilization of labor resources has diminished since early this year,” officials said.

Many economists have worried that recent losses in China’s equity markets reflect deeper worries over growth prospects for the world’s second-biggest economy. Slowing demand from China has also helped trigger a global slump in commodity costs, adding downward pressure to prices in the U.S.

Inflation, as measured by the Fed’s preferred gauge, was 0.3 percent in the 12 months through July and has lingered below 2 percent for more than three years.

Consumerexpectations for inflation three years ahead fell last month to the lowest level in records going back to June 2013, according to a Federal Reserve Bank of New York survey released Monday.

The median respondent to the New York Fed’s August Survey of Consumer Expectations predicted annual consumer price inflation three years hence would be 2.9 percent, down from 3 percent the month before. Median expected inflation a year ahead fell to 2.8 percent from 3 percent, marking the second-lowest response in the history of the survey.

The results come ahead of Sept. 16-17 meeting of Fed policy makers in Washington at which Fed ChairJanet Yellen and her colleagues will debate whether to raise interest rates for the first time in nearly a decade.

Officials said in a statement following their last meeting in July that they needed to see “some further improvement” in the job market and be “reasonably confident” in the inflation outlook. Their preferred measure of prices, the personal consumption expenditures price index, was up 0.3 percent in July from a year earlier and has run below the central bank’s 2 percent target for over three years.

Fed Vice ChairmanStanley Fischer attributed much of the current shortfall to the recent drop in oil prices and appreciation of the U.S. dollar during an Aug. 29 speech in Jackson Hole, Wyoming.

“Given the apparent stability of inflation expectations, there is good reason to believe that inflation will move higher as the forces holding down inflation dissipate further,” Fischer said.

Federal Reserve policy makers said the job market has made further gains, keeping them on a path to raise interest rates this year for the first time in almost a decade without providing a clear signal on the timing of liftoff.

Federal Reserve policy makers said the job market has made further gains, keeping them on a path to raise interest rates this year for the first time in almost a decade without providing a clear signal on the timing of liftoff.

“The labor market continued to improve, with solid job gains and declining unemployment,” the Federal Open Market Committee said in a statement Wednesday in Washington. It dropped the modifier “somewhat” from its description of the decline in labor-market slack.

With Chair Janet Yellen and her fellow policy makers saying their decisions are “data dependent,” the focus turns to figures on growth, jobs and inflation that will help determine whether the Fed raises rates in September, as many economists expect, or later in the year.

“The committee is keeping the door open for rate hikes later this year, not necessarily opening it further or closing it,” said Michael Gapen, chief U.S. economist for Barclays Plc in New York and former Fed Board economist. “Labor markets have improved further, and they need to see a little more improvement to be ready to go.”

The Fed made a one-word change to its language on conditions that would justify a rate increase: It needs to see “some further improvement in the labor market,” adding the modifier “some,” and it must be “reasonably confident” inflation will move back to its 2 percent goal over the medium term.

It also dropped a sentence saying energy prices appeared to have stabilized. Some economists took that change as a signal of heightened concern over inflation that’s trending lower as energy prices decline.

“It was one step forward and one step back,” said Brian Jacobsen, who helps oversee $250 billion as chief portfolio strategist at Wells Fargo Advantage Funds in Menomonee Falls, Wisconsin. “The Fed only needs to see a little more improvement in the labor market to justify a rate hike, but the recent decline in commodity prices has marginally dinged their confidence in the inflation outlook.”

The next read on the economy will come Thursday with data on second-quarter gross domestic product. Economists project the report will show a 2.5 percent pace of expansion, confirming Yellen’s view that a first-quarter contraction was transitory.

Fed officials have been heartened by job gains as unemployment fell to a seven-year low of 5.3 percent in June. At the same time, inflation has lingered below their goal for three years, with the Fed’s preferred gauge rising just 0.2 percent in May from a year earlier.

Economists surveyed last week said the odds of a rate increase at this meeting were virtually zero, while the chance of a move in September was around 50 percent.

The committee has kept the benchmark overnight federal funds rate at a record low of zero to 0.25 percent since December 2008, in the midst of the worst recession since the Great Depression.

A slowdown in China that has rocked global equity markets could weaken the case for an interest-rate rise this year, though there was no change in the Fed’s language on international developments.

Concern over China’s growth outlook has helped drive the Bloomberg Commodity Index almost 8 percent lower since Fed officials last met in June. That, in turn, could push inflation down even further.

The FOMC is next scheduled to gather on Sept. 16-17, with additional meetings this year set for October and December.

Traders are pricing in a 39 percent probability that the Fed raises rates at or before the September meeting, little changed from before Wednesday’s gathering. Those odds are based on the assumption that the effective fed funds rate will average 0.375 percent after liftoff.

The median estimate of the 22 primary dealers surveyed by the New York Fed is that the fed funds rate will average slightly less, or 0.35 percent, after the first increase. 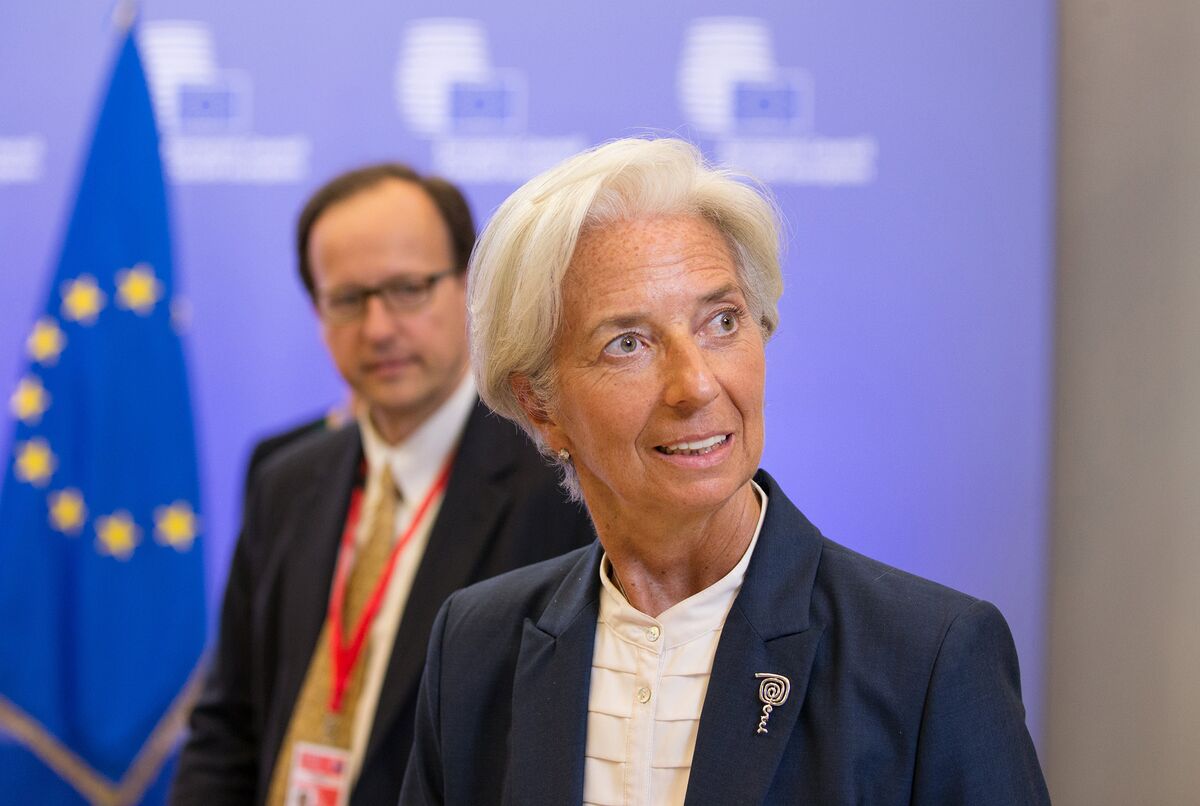 Greece needs debt relief “far beyond” what European creditors have been willing to consider, including possibly deep “haircuts” on the value of Greek debt, the IMF said in a new analysis.

Bank closures and capital controls have exacted a “heavy toll” on Greece’s financial system and the economy, leading to a dramatic deterioration in the ability of the country to pay its debts, the International Monetary Fund said in a preliminary debt-sustainability analysis released Tuesday.

“Greece’s debt can now only be made sustainable through debt relief measures that go far beyond what Europe has been willing to consider so far,” the IMF said in the analysis, which follows a similar study released July 2, before Greece held a referendum that rejected creditors’ proposal.

The IMF now estimates Greece’s debt to peak at close to 200 percent of gross domestic product in the next two years. In its analysis released July 2, the Washington-based fund said nominal gross public debt was on track to reach about 170 percent of GDP by 2017.
The IMF said the projections are subject to “considerable downside risk, suggesting that there could be a need for additional further exceptional financing from euro-member states.”

The fund said there are several options for bringing Greece’s finances under control. Providing debt relief by extending maturities would require a “very dramatic extension” on the order of 30 years on the entire stock of European debt, including new assistance, according to the IMF.

“Other options include explicit annual transfers to the Greek budget or deep upfront haircuts,” the IMF said in its analysis. “The choice between the various options is for Greece and its European partners to decide.”